Custard Some new songs at The Triffid

Custard played their new LP at The Triffid. A packed house. By all accounts it was very good. See for yourself.

Though today isn't the blogs actual birthday it is the 9th anniversary of the last 4ZZZ Market Day where I used in battle for the first time my brand new mini-disc recorder with Sound Professional in-ear binaural mics fed through a Sound Professional Microphone Pre Amplifier that had arrived in the mail the day before.

My practice was turning up the stereo really loud and singing along really loud. This particular tape has disappeared; possibly a good thing.

What hasn't disappeared is the recordings of a single song from Bertha Control, and full sets from Sekiden, Giants of Science, i heart hiroshima, jump2lightspeed, and Iron On. Grab them all put your headphones on and Turn It Up!

Marlon and The Yarra Benders played at Black Bear Lodge on the last night of their tour and I was not disappointed though I thought the support act Laura Jean had a good voice but the material uninteresting.

I hope you enjoy this as much as I did.

Laneway 2015 Three of The Best 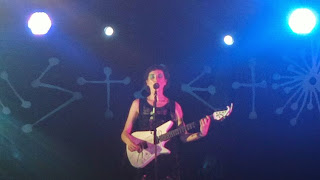 Well I would say that wouldn't I.

I saw these three acts on the outdoor stage and fortunately by the time they appeared most sound problems had been worked out. I'm assuming they were problems but who knows. The sound treatment of early acts is notoriously bad.

Perfect Pussy who I saw first was unlistenable. The singer was really getting into it but I didn't hear a word of her performance and the guitar sound was buried in the wash produced by the electronics guy. I'd like to see them in a better setting.

The Connan Mockasin set has had the really loud bass quietened down. It annoyed people around me in the crowd so it wasn't just me.

Meanwhile over on the main covered stages the metal roof made everything pretty harsh. Down the front it may have been better but halfway back it was annoying.

So back to the outdoor stage for Pond and St Vincent. I sat out the back drinking beer during Future Islands but what I heard didn't thrill me too much.

Almost forgot. I missed the last 5 min or so of St Vincent so I didn't get the last song [unless she went longer] Also I do recommend you listen to all of these sets with headphones or buds at least. Noise canceling cans are best but whatever you have will sound better than speakers. And St Vincent deserves that.

Some Prince Of Wales sets

Last night in all its glory. For a number of reasons I didn't get Front End Loader. Maybe next time.


with bonus punk and whatever the hell you call Lovecraft from a show god is it that long ago.

I have written the password on a piece of paper. As soon as I remember where I put the piece of paper I'll post more stuff.
No comments:

Email ThisBlogThis!Share to TwitterShare to FacebookShare to Pinterest
Labels: giants of science, greig

Hits. All Hits. Nothin but Hits. 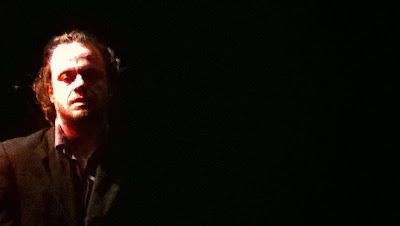 Supporting The Scientists at the Hi-Fi Bar. Truly wonderful stuff. The Scientists stood side stage for much of the set and seemed to enjoy it too. Really looking forward to the LP Launch in a few weeks.

Batteries died as The Scientists hit the stage. Late. And they played till after midnight. But do we care it was a school night. No cause we are hardened rock beasts. Or in the case of the front row, retired.
3 comments:

Email ThisBlogThis!Share to TwitterShare to FacebookShare to Pinterest
Labels: hits

Girls Germs and The Flangipanies

One off reunion show before one germ departs for the USA. Supported by The Flangipanis and Loud Goes Bang who I didn't record as I got there a little late.

Half the Flangipanies set is Blister covers before they kick off their own stuff with 'My boyfriend likes ebay more than he likes me'. Good fun band.

Girls Germs were local heroes in the 90s. I missed them first time round which is a pity. Brisbane had some world class pop punk power pop whatever bands and these guys are among the best.

First Scott and Charlene's Wedding who I did not know were playing in support of Mission of Burma so I got a pleasant surprise. A short rocky set which means n Epping Line and just the four on stage so no Spazzy's. But it was fun.

Email ThisBlogThis!Share to TwitterShare to FacebookShare to Pinterest
Labels: scott and charlene's wedding

per purpose at Black Bear Lodge 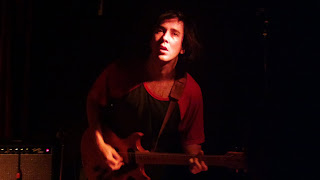 Email ThisBlogThis!Share to TwitterShare to FacebookShare to Pinterest
Labels: per purpose

What a weekend. Mountain man Heinz making a rare appearance in Brisbane. And Dreamtime back from the US fired up and ready to go.

No Anchor with O at The Waiting Room

Last night at The Waiting Room O were good. No Anchor were great. Such a good venue. Thanks Cam.

And thanks to Mediafire for making it just that little bit harder to operate.
No comments:

Email ThisBlogThis!Share to TwitterShare to FacebookShare to Pinterest
Labels: No Anchor, O

A few acts only. Sorry. I was in the best place in the word to be in a bad place that weekend so I'm thankful for that.

Couple more to come
No comments:

Two nights , two sets by Screaming Match, last night of The Fancy Boys, and King Tuff do Brisbane very quickly. It was a good week. Apart from The Fancy Boys going their separate ways to China, Indonesia and whichever part of Brisbane X lives in.

King Tuff were OK and would have been better with more people. The front section was pretty happy though. Workmanlike performance.

Fancy Boys will be missed. Adam Scott will be missed especially. I am sure he will find a bunch of guys in Jakarta to make music with.

Screaming Match are really really good. Listen and find your own references, there are many. But it all comes together with it's own voice. If you only want one set get The Primitive set. But get both.

For Dave and Anonymous

Solos Only at The Waiting Room

And we all had a real good time.