The Hi-Fi Bar and it was relatively gentle to the bands tonight.

Black Widow with Joel Stern make noise that is hypnotic and complex but easy to listen to. I'm never sure what to say about music like this. I find it dfficult to see the overarching patterns if there are any so I can only enjoy the moment.

Lost Domain were great. The singer getting more frantic [much nicer word than unhinged] as he went along with support from some deadnotes. Lotta fun

Blank Realm I keep getting mixed up with noise bands i guess because of their name. They are actually a pretty good rock band though that may be based just their choice of material on the night.

Jandek I know largely from his earlier acoustic work so tonight was a revelation. Quite electric and in parts almost rocking. His backing band were really good. I am pretty sure the bass guitar didn't open her eyes the entire set. If you know Jandek or if you don't it doesn't make much sense me trying to describe it so you best listen for yourself. This was one of my top shows of the year so far and for surprise it will be hard to beat.

i was hoping it hailed sunday night. my hire car wasn't covered for hail so we left after dirty projectors. missed calexico and cruel sea. the rest for me was like this

royal headache - not too bad would look for again.
lou barlow solo set at inspiration point. - pretty damn good but windy and why the fuck do people come all the way over from the main stage to stand down the back and talk. the recording is full of crowd noise and wind oh so much wind noise. if i can clean it up i'll post it at a later date.
monotonix - jesus my arms are still aching. was near front to start with. band started on platforms on crowd side of barrier a la lightning bolt. after 1st song band decided to move drum kit off platform into crowd and i find myself standing in front of him holding back the red sea. mics did not pop out of ears so set is basically me going ah fuck what the fuck jesus fuck fuck off etc while singer, guitarist, and eventually drummer surf above our heads. plug finally pulled before someone gets killed. was extreme fun. never want to do that again. i have no idea what they sound like.
the big pink - pretty good but anticlimactic after monotonix
antibalas afrobreat orchestra - upbeat afrobeat but strangely dis-engaged/un-engaging. known anti taping so i can't post sorry. someone else might though.
pavement - rough round the edges but magic soon enough
dinosaur jr. not as loud as i expected but clear as hell. really really good.
super wild horses. sound a little unbalanced but they get into it. crowd enjoys it for a wake up set
jack ladder - was back at camp packing tent in short dry sunny period. campers next door ask what the fuck is that noise. probably a bad time for their style.
jeffrey lewis & the junkyard - good fun
wooden shjips - fucking brilliant. crowd favourites. got the shoes up big time.
space invadas - pretty average UK soul band.
nashville pussy - absolute fun.
dirty projectors - really disappointing. 6 charlies in search of a tune. some enjoyed them but most people were very 'mehh'

So much rain. Does it ever not rain at meredith?
3 comments: Links to this post

Raekwon has a deep catalogue that he obviously wants to give to the fans but this translates to few songs longer than about 2m30sec with the explosion sound chopping stuff just as you get into the groove. I'm listening to Cuban Linx II as I write this and it is brilliant stuff. And I don't get the same feeling even from the songs that are just as short. Translation to stage is I guess any artists problem.

Have no fear, what I heard was great and Raekwons chat with the crowd is good natured and he seems to be enjoying himself in Australia and on stage tonight. But the short songs are annoying for me. The crowd however went wild so what do I know :)

To be honest on the night I preferred the performances by The Optimen and Lazy Grey. Both DJ's are really interesting with DJ MCE behind Lazy Grey the standout for me. And 30min of the intensity of Lazy Grey [and half of Brothers Stoney] was worth at least half the entry price so I'm ahead really.

This was one fantastic concert. But it shows up the sound in the Hi-Fi Bar. I went doen the front so I could get decent guitar sound and I got that but after a few songs I realized that the vocals were coming from behind me about 15 feet up in the air. I suggest you listen with headphones. Brilliant bands both but Yo La Tengo are sublime but I feel I haven't done them justice.

Special thanks to David [crankingamps] who provided the ticket for tonight.
No comments: Links to this post

Email ThisBlogThis!Share to TwitterShare to FacebookShare to Pinterest
Labels: songs, yo la tengo

This was probably the best Hanger show for the last couple of years. Every band was in top form. The audience was into each band and was cool. It was cool [in the temperature sense and that means a lot].

Probably the best Loomer set I've seen. They get better all the time.

Caught Ships set a wicked groove and Ben wanders through the crowd. That's me he says "haven't seen you for a while etc" to in the middle of the set. At the time I had plugs in and all I could say was 'i can't hear a word you're saying'
Caught Ships - Live @ The Hanger - 13 Feb 2010

Equipment problems don't phase the audience even if they seem to piss the band off but really I am finally starting to get these guys and when they fly they really do go.
Kitchen's Floor - Live @ The Hanger - 13 Feb 2010

What can I say about these guys except they must really be a mind fuck in Hobart. But they cover a Hobart songwriter in a song which include the brilliant couplet "but i'm sleeping on a mattress in your kitchen and sooner or later you're gonna hafta eat" so at least there's two of them I guess.
Paint Your Golden Face - Live @ The Hanger - 13 Feb 2010

I really did forget these guys in my rush before I went south. From the Pains Of Being Pure At Heart show, the supports

My only visit to Up Late @ ATP6. And what a night. Ed Kuepper & The Kowalski Collective with support from Littel Scout now with 50% more Tickle but on the night 100% less Kovic.

Noise From All Sides @ Rosies and Tom's

First the gig I forgot to post. Birushanah came to Rosies with supports local and other. Excellent stuff.

Then just last weekend Robert Inhuman as Realicide brought the noise to Tom's backyard at Sonic Boom #1,000,000. Along for support was Ambrose Chapel. Such fine young men. 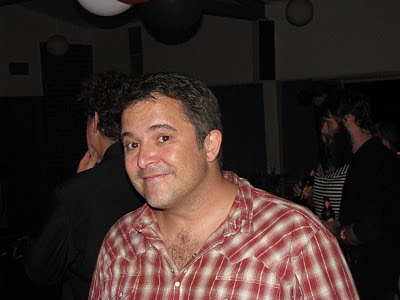 He is currently traveling round Australia doing the Pavement tour as a paying punter. I am off now to Golden Plains and have promised him the Pavement set. I sure as hell hope nothing goes wrong. Does he look like a man you want to disappoint :)
No comments: Links to this post

HEALTH are very good. Their drummer I could watch all night. To some extent i had to cause the rest of them regularly disappeared to the floor to play with pedals. Tom Hall as Axxonn gets better every time I see him and Stature;Statue who I haven't seen for a while are better than ever.

For 40 minutes there The Thin Kids were probably the most important band, if not the best band in Brisbane. Consisting of Jerry [Everett[The Legend!]True]Thackray, Ed Googely Woogely [any relation to Natalie Embrougely Woogely?], [Jim Beam Me Up]Scotty Regan, and that little chick on the end there, they deconstructed rock music then reconstructed it as grunge would have sounded if Mrs Mills had been Robert Johnston. Either that or it was a joke. I liked 'You're Not On The Guestlist, You're Not Coming In!

Email ThisBlogThis!Share to TwitterShare to FacebookShare to Pinterest
Labels: the lonley sea and the sky, the thin kids, velociraptor

The Pains Of Being Pure At Heart

have nice songs. I was disappointed with their stage presence though.

Email ThisBlogThis!Share to TwitterShare to FacebookShare to Pinterest
Labels: The Pains Of Being Pure At Heart 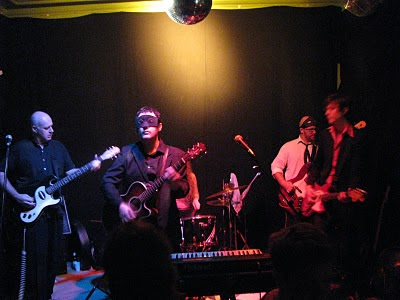 Email ThisBlogThis!Share to TwitterShare to FacebookShare to Pinterest
Labels: Five

was fun. Must dio it again. Chinese Burns are a great band. In fact they are as good as any of the bands Adam Scott is in and that is damn good believe me.

This was not as metal as thought it might be. More Alice Cooper. But he was fun.